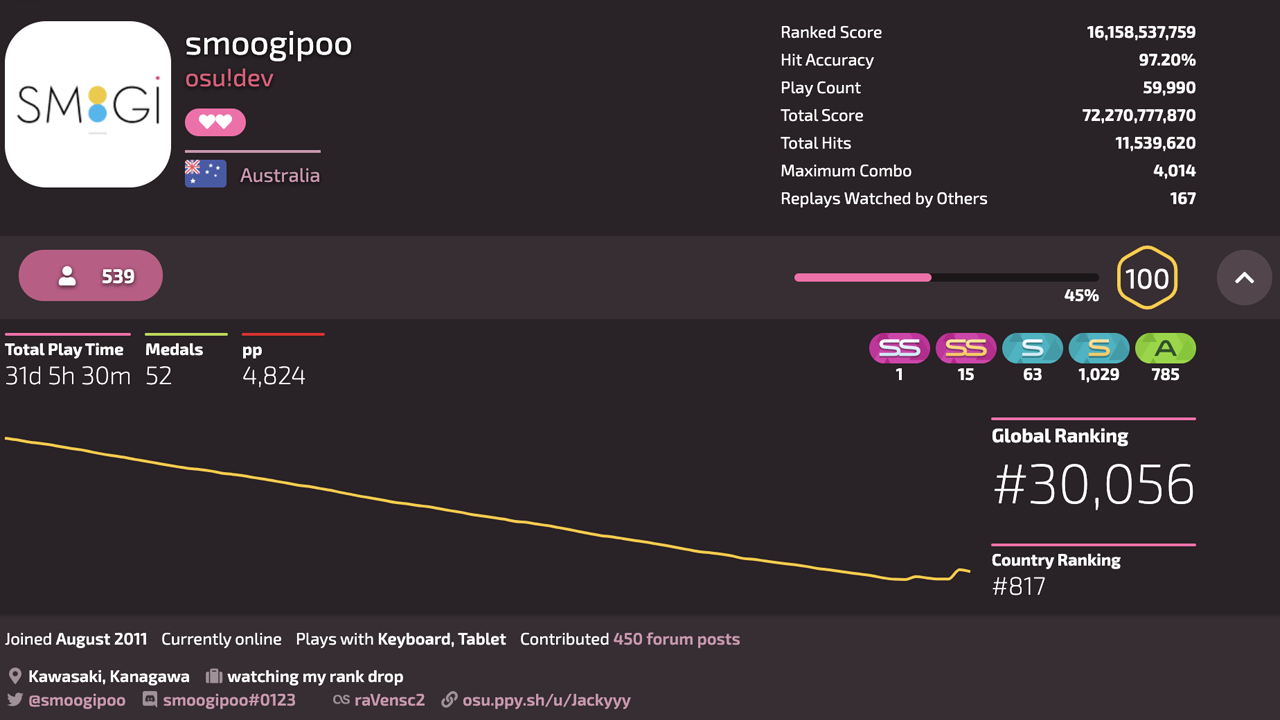 I haven’t played osu! competitively since early 2014 as I took on more responsibilities in developing the game instead. A few months ago I started talking about getting competitive at it again but I couldn’t find the time to do so until now. I have two primary goals in mind:

Presently, top 10 in Australia is already top ~200 worldwide, but I’ll have to become much better than that to make up for lost time. This is the challenge I’ve set for myself and forms the basis of my mentality going into this.

After not playing for such a long time, I started to “understand” things. As the mental blocks cleared it seemed easier to focus on rhythms and really tighten my UR, I could more accurately stream at varying BPM levels and really push my speed when required, and tapping transitioned from my weakest to one of my strongest points. I’m still bad at all of these but now there’s a path forward that doesn’t feel like hitting a brick wall.

With that in mind I’ve started a focused routine to incrementally improve at all skillsets in turn, starting with my (personally) most important skill: aim. For now I’m keeping all other skillsets in a “passable” state requiring minimal focus while I put as much as I can into aiming.

Aim is a little bit of a touchy spot for me. Back in 2013/14 I used to attempt scores with HR that very few players could do - Freedom Dive [FOUR DIMENSIONS], Pluto [Challenge], Intersect Thunderbolt [Exceed], Azul [Extra], to name a few, and was never held back by my aim. Some of my oldest Twitch.tv viewers may remember my frequent attempts at these maps back then.

When aiming I’ve always used my peripheral vision to be able to read more of the map at once, but very close to quitting I played a lot of relax and found how much more potential my aim had if I’d been able to aim per-note. It was too late at the time, but these days I believe I can aim per-note and this is the biggest change I’m making to my playstyle.

This last week has brought my aim to a level I could almost consider on-par with my 2013/14 self, but with different skillsets and not without issues. In particular, since I’m holding the pen much higher up now I’ve had to retrain my grip through sticky tape, limit the height at which I hold the pen (also via sticky tape), and adjust the position/size of my area. The biggest problem I have is my aim “stuttering” either due to lifting the pen too high or the tablet skipping, and every time it happens I have to divert focus to figure out what happened and adjust, reverting me back to peripheral aiming.

Part of my aim also depends on a pinky callus developing/hardening and some thumb skin hardening, but those will happen over the next couple of weeks/months and I expect my aim to loosen up alongside.

This coming week is a week of no play for me while my hands heal up and mental blocks clear up. Week 2 will continue on August 24th.

If you’re interested in following my progress, I’ll be streaming it on Twitch.tv from around 20:00 UTC+9:00.